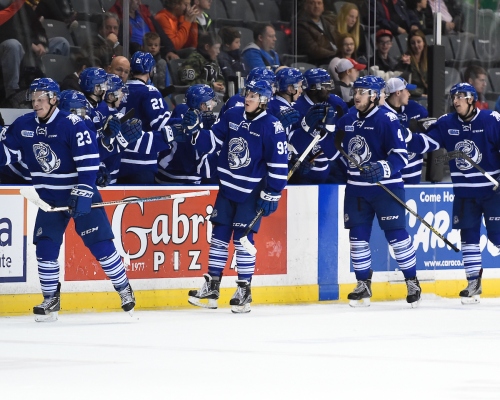 You could be forgiven if the Central Division gave you a sense of déjà vu last season, as all five teams landed in the exact same order as the year before, but don’t expect that to happen again. The 2016-17 season likely will represent a changing of the guard at the top of the division, with the Barrie Colts and Niagara IceDogs likely seeing their championship window close, and the Mississauga Steelheads gearing up for their turn at the top of the standings. While North Bay looks to remain their dependable selves, the wild card could be the Sudbury Wolves. While they are years away from contending, they’ve been building young talent for a while, and if some of those players can blossom earlier than expected, the Wolves might have more bite than in years past.

WHAT WE KNOW: The Colts are going to be a very different team, having lost the majority of a very strong core that led Barrie on multiple deep playoff runs. In their place, the Colts will need to rely on overagers like Roy Radke to find another gear on offence, while hoping youngsters like Kirill Nizhnikov can find their stride early in their careers. The Colts have a steady if unspectacular defence corps, led by the returning Cam Lizotte. Goalie David Ovsjannikov looked good in Barrie after coming over from Saginaw, but will have big shoes to fill with Mackenzie Blackwood graduating.

WHAT WE DON’T KNOW: It’s still hard to tell where the goals will come from with this group. The Colts highest scoring returnee is Anthony Stefano, but he only had 21 goals and 44 points, hardly enough to lead an offence. While the defence looks fine on paper, there are still enough fresh faces and unproven players to cause worry.

PLAYERS TO WATCH: Radke is the only NHL draftee on the Colts roster. After being a good soldier for the Colts best years, he will need to take a step up and lead this team. For a preview of what Barrie is building towards, keep an eye on Nizhnikov and defenceman Tyler Tucker. The pair were both taken in the 1st round of the past OHL draft and should get plenty of playing time on a rebuilding team.

WHO’S GONE: You could make an all-star line-up out of the Colts graduates. Kevin Labanc, Andrew Mangiapane, Rasmus Andersson and Mackenzie Blackwood were simply amazing OHL players that cannot be replaced, while mid-season acquisition Dylan Sadowy was a great player in his own right. You also have to mention players like Justin Scott, Michael Webster and Julius Nattinen, who made up the depth of last season’s squad.

EXPECTATIONS: Barrie went for it all last year, and now the slow climb back up begins. Barrie fans really shouldn’t be looking for this team to make a ton of noise, but there are enough young players and talent around for fans to be excited about. The Colts will be in tough to stay out of the bottom of the division, but it is the on-ice competitiveness, not the standings, the fans should judge next season’s team by.

WHAT WE KNOW: The Steelheads should have top end talent in spades, and that’s even without Alex Nylander. Michael McLeod and Nathan Bastian return as NHL draftees to a forward corps that could have two more players add their names to that category in Michael’s brother Ryan McLeod and sniper Owen Tippett. The defence should be dynamic, with Sean Day, Austin Osmanski and Nic Hague welcoming newcomer Jacob Moverare into the fold. The defence will even become dynamic once off-season acquisition Villi Saarijarvi returns. Matt Mancina was also added in the off-season to man the crease, and it should be in good hands.

WHAT WE DON’T KNOW: While the Steelheads have a ton of talent, they were rather inconsistent last season. This year we will have to see if that was just a matter of age, or perhaps a bigger concern. The Steelheads also lost some of their depth to graduations; new players will need to step up.

PLAYERS TO WATCH: The McLeod brothers are definitely key players for this team, especially Michael, who will be asked to carry the scoring load. Sean Day remains an intriguing player to watch, capable of making big plays but also some head shakers. Nic Hague has scouts drooling, as the 6’5 Dman scored 14 goals from the back end last year as a rookie.

WHO’S GONE: Losing a talent like Nylander is a blow. The Steelheads might replace his production, but no one on the team has the same game-breaking ability. Josh Burnside was a reliable second level scorer, as was Daniel Muzito-Bagenda, who both graduated.

WHAT WE KNOW: While it shouldn’t be as hard a fall back down to earth for Niagara as it could be for Barrie, there will be a step back for the IceDogs. After aggressively pursuing talent for a Memorial Cup Finals appearance last season, returning players like Graham Knott, Johnny Corneil, Chris Paquette, Aaron Haydon and Ryan Mantha ensure that the cupboard isn’t bare. Throw in expanded roles for last season’s first rounders Ben Jones and Hayden Davis, and it’s clear the IceDogs won’t go for too harsh of a tumble down the standings.

WHAT WE DON’T KNOW: How good is Niagara’s depth? After Knott and Corneil’s 40-point seasons, no Niagara forward had more than 16 points last year. With so many new faces, it is difficult to project how all the pieces will fit together once the season begins. Stephen Dhillon was okay in net last season, but if he falters, there is only rookie Colton Incze as a fall back plan.

PLAYERS TO WATCH: After being selected in the 2nd round of the NHL Draft in 2015, Knott was expected to take a bigger jump last season, but his numbers actually took a slight drop. Scouts often mention how it takes bigger players longer to breakout, and the 6’4 Knott certainly fits the description; don’t be surprised if that happens this season. A lot of Niagara’s success hangs on recent first rounders Jones, Davis and Akil Thomas.

WHO’S GONE: Josh Ho-Sang, Jordan Maletta and Brendan Perlini did the majority of the scoring for Niagara last season, and all are moving on to pro careers. Vince Dunn and Blake Siebenaler will join them in the pros, taking away half of Niagara;s top four. Goalie Alex Nedeljkovic leaves a large hole in net.

EXPECTATIONS: It should be a year of decline for Niagara, but it isn’t all doom and gloom. With the players left over from last season, and the growth of the younger players on the roster, the IceDogs will likely still make the playoffs, although how far they go will depend on how quickly the new faces get up to speed.

WHAT WE KNOW: Well they’ll be stout defensively. Just about every Stan Butler team preaches defence and this year should be no exception. They could field one of the better top pairings with Riley Bruce and Cam Dineen. The offence hasn’t completely dried up with the majority of their forward corps returning, including Brett Mckenzie, who broke out last year with a 53-point season.

WHAT WE DON’T KNOW: While he should have an improved year behind the Battlion defence, goalie Brent Moran has only flashed quality goaltending at this point. He’s going to need some consistency to replace Jake Smith. Losing Amadio and Matt Santos leaves a 167- point hole in the offence that will be hard to fully replace.

PLAYERS TO WATCH: Cam Dineen came out of nowhere to become one of the more dynamic offensive defencemen in the OHL last season. He’ll need to continue to produce with a weaker supporting cast this time around. Last year’s first round pick Brady Lyle also has the ability to push the play from the back end. Daniil Vertiy was a nice addition during the season last year, look for him to take a jump now that he’s comfortable with his surroundings.

WHO’S GONE: Losing Mike Amadio hurts, as Amadio was one of the best offensive talents in the Battalion’s history, while also being defensively responsible. He simply won’t be replaced. Santos, Kyle Wood and Jake Smith were also big time players for the Battalion last year.

EXPECTATIONS: North Bay certainly seems like the most likely team to challenge Mississauga for the top of the Central Division. While they may not have the flash of the Steelheads, they have a veteran team, a coach you can bank on, and a solid defence corps with the potential to be even more. It should be another playoff appearance for the Troops, with a shot at home ice.

WHAT WE KNOW: The Wolves enter the season looking for a jump into relevancy after another season of rebuilding. Things should be better this time around with proven veterans like Zack Bowman, Ryan Valentini and Jarrett Meyer being brought in last year, and Aiden Jamieson and Liam Dunda joining in the offseason. The forward corps may surprise, with highly touted forwards David Levin and Dmitry Sokolov boasting high-end talent, and depth coming from Michael Pezzetta and rookie surprise Alan Lyszczarczyk. The defence has a pretty good top pairing in Jamieson and Kyle Capobianco.

WHAT WE DON’T KNOW: While the pieces are starting to come together in Sudbury, the puzzle is far from complete, making it difficult to get the picture of what the team will be able to accomplish this coming season. There are still holes on defence after the top pairing, and the forward corps lacks any punch after Levin and Sokolov.

PLAYERS TO WATCH: David Levin enters his second year after being the #1 pick in the OHL draft last season. He certainly flashes potential, netting 30-points, and should be interesting to watch if he takes a jump. Remember, Kitchener’s Adam Mascherin only had 29 points in his rookie year. Bowman will have to stand on his head often to keep Sudbury in games.

EXPECTATIONS: Again, expectations are muted in Sudbury, as the team looks to finally jump into playoff contention. It will be a challenge for this team, but at the very least, they need to keep them selves out of the bottom of the Eastern Conference.