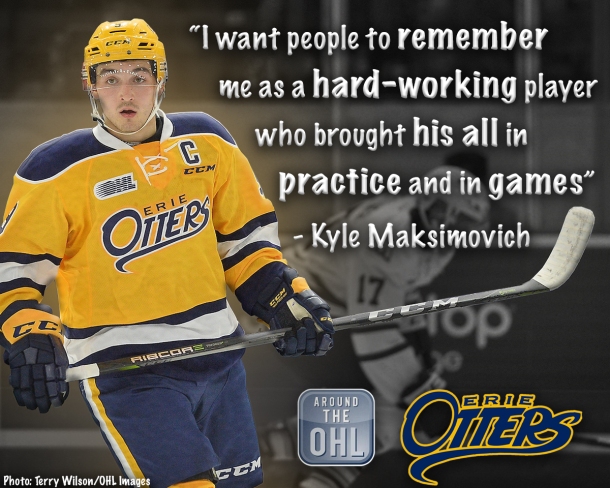 It’s been nearly a year and a half since May 12th, 2017. It was on that day, that Anthony Cirelli beat Matt Mancina of the Mississauga Steelheads in overtime to win the J. Ross Robertson Cup for the Erie Otters. Now over 520 days since, Cirelli is long gone, as is Dylan Strome, Warren Foegele, Troy Timpano, Alex DeBrincat, Darren Raddysh and all the other pillars that supported Erie’s championships dreams. All but one that is.

Kyle Maksimovich is the only active OHLer with three 60+ point seasons to his credit, and he’s one of only four pieces left over from that championship run a year and a half ago. That season, he posted 64 points on a star-studded Otters team that nearly won it all in the Memorial Cup final. Although much has changed since, Maksimovich’s production rate has not. That season was sandwiched between a career-high 71 point season and 66 point season subsequent, making Maksimovich one of the OHL’s most consistent point-getters in that time period.

In that span, Maksimovich has seen seasons of 40+ assists, but finally saw his goal scoring take a spike with 31 tallies in 2017-18. Numerically, he’s had an impressive career, but Maksimovich takes pride more in his versatility rather than how the numbers portray him.

“I kind of evolved from being a second line player, a support player. As I’ve gotten older I’ve been counted on as a leader and try and be better for the team,” said Maksimovich. “I still consider myself a playmaker, but at the end of the day I gotta help out the best way I can in whatever way, whether that’s hitting, sending a message, or my work ethic.”

Now captain of the Otters with four years of experience to look back on, nobody else can say they’ve seen what Maksimovich has as an Erie Otter.

“He’s built his way up through the program. His rookie season he got to play with Connor McDavid and play in the OHL Final. Then he had a long run again in 2017 when we won the OHL and went to the Memorial Cup,” said assistant coach Wes Wolfe who’s been with Erie since Maksimovich’s third year in the league. “Kyle has experienced a lot of things in this league, he’s played a lot of games.”

Many games indeed. Matter of fact, Brian Lee’s Otters all-time games played record of 319 is very much in jeopardy. If Maksimovich avoids suspension and stays healthy for all 68 games, he’ll finish with 321 in his career. Although Dylan Strome’s franchise record 354 points is still safe, Maksimovich currently finds himself in ninth on that list, just 10 points behind Connor Brown who has 250. Theoretically, if Maksimovich keeps up his pace and posts at least 60 points this year, he’d tie Connor McDavid for fourth overall with 285 points.

Personal accolades aside, Maksimovich has a difficult task in maneuvering Erie into a playoff position. After being named captain in January of 2018, he’s been tasked with leading the dressing room through what’s been a complete overhaul of the roster.

“I think we can [make the playoffs]. We have the power to do it, we have the players to do it, and I don’t think they need too much leading from me. I’m just gonna try and do my best and help out the young guys,” said Maksimovich.

Being a positive influence on the next generation is an important duty for any captain, but few have the resource of experience that Maksimovich does. Over the years, he’s had an opportunity to spend extended time playing with, being around, and learning from future NHLers.

“Watching the big-name guys like Strome, McDavid, Remi Elie, Nick Baptiste and seeing what they do before the game, I took note of that,” said Maksimovich of his former teammates.

Finding out how seriously veterans on previous incarnations of the Otters treated preparation is something Maksimovich gives great credit towards his recent consistency.

“Mentally and physically they prepared like pros. You see most of those guys playing in the NHL now. That comes with their preparation, and that’s how they got there,” said Maksimovich. “Warren Foegele has been lighting it up in Carolina. You see that guy, headphones on before the game, he’d be doing his own warmup, stretching, getting his body ready for when our team warmup starts. That’s just one example of how preparation matters.” 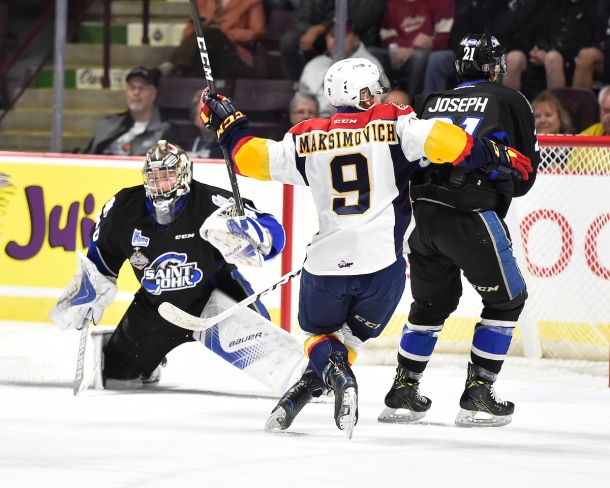 Wolfe sees Maksimovich’s habits on a daily basis. But he believes the captain’s dedication to preparation can be seen well before he shows up to the rink for game day.

“It starts in practice. It doesn’t matter if he’s competing against a guy on the first line or a guy on the fourth line, he’s gonna give it his absolute best and makes the most out of every opportunity to get better,” Wofle said.

That competitive spirit is something Maksimovich truly hopes will become a big part of his legacy with the Otters once his days in junior are done.

“I want people to remember me as a hard-working player who brought his all in practice and in games. I’m a competitive player and I want guys to remember me for that rather than the numbers or how many games or any of the other stats.”

Even though Maksimovich is on borrowed time in the OHL, he has a lot to play for. Aside from leading his Otters into a playoff position, Maksimovich is undrafted and unsigned by an NHL team, leaving his future outside the OHL a mystery.

“He’s still hungry,” said Wolfe. “Even though he’s had a lot of success individually and at a team level, he probably doesn’t get the respect he deserves for what he’s done in our league.” 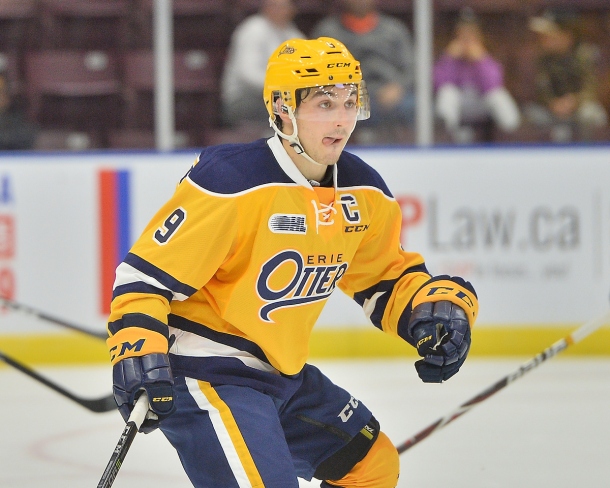 To find a way to make an impact at the next level after he’s done in the OHL, Wolfe still sees some improvement in order for Maksimovich on the defensive side of the puck.

“Being better defensively, that’s a part of the game that every player is trying to evolve. I know he had a brief stint with Rockford last year on an amateur try-out offer. They wanted him to be harder to play against,” Wolfe said. “I don’t think Kyle needs to necessarily be a pest, but he needs to be relentless, getting in hard on the fore-check, and be in on the 200-foot game where guys don’t want to be on the ice against you.”

There’s certainly still time for Maksimovich to leave us something more to talk about from his OHL days. But just as the way McDavid, Strome, and other former Otter captains have done, they don’t need to be on the team anymore for their impact to still be felt.

Although Erie’s team is barely recognizable compared to their unstoppable cast of characters from 2017, the championship spirit lives on with Maksimovich. His consistency and preparation continue to set the bar for his teammates. As a result, it won’t be long before another Erie captain is talking about what he learned from watching Maksimovich.