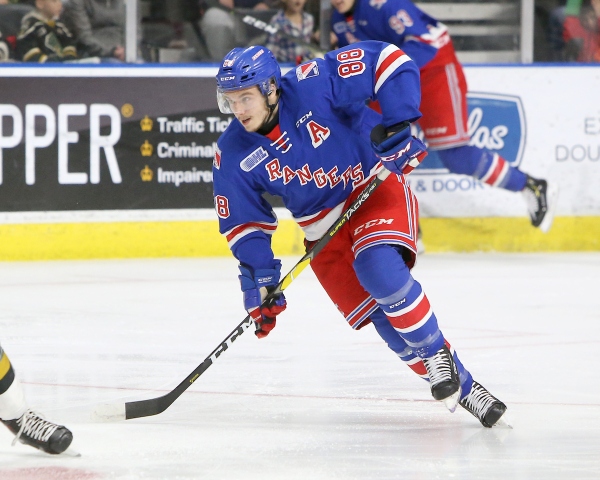 Kitchener Rangers forward Greg Meireles has been named the OHL’s Player of the Week for the regular season week ending March 10 after recording nine points in three games including two goals and seven assists with a plus-minus rating of plus-2.

Meireles led the league in scoring last week and extended his personal point-streak to 17 straight games while helping the Rangers pick up a pair of wins. On Wednesday night he chipped in two assists despite a 5-3 road loss to the Hamilton Bulldogs, but rebounded Friday night with a goal and three assists to match a season-high earning second star honours in an 8-4 win over the Erie Otters. His week wrapped up Sunday afternoon in Guelph with a goal and two assists and second star recognition as part of the 5-2 victory over the Storm.

Meireles was part of a dangerous unit that filled the game sheets for the blue shirts over the weekend as both Riley Damiani and Joseph Garreffa tallied seven points, while Jonathan Yantsis picked up six points in three games.

He is the second Ranger to be named OHL Player of the Week this season as Damiani received the honour just over a month ago.

The Rangers currently occupy fifth place in the standings with a 32-29-3-1 record, and are also feature in the latest Around The OHL Power Rankings.

Sault Ste. Marie and Oshawa will bid for the 2021 Memorial Cup, who do you think gets it?? #memorialcup #chl #juniorhockey #ohl #qmjhl #oshawagenerals #saultstemariegreyhounds #oshawa #saultstemarie
Check out Shane Wright on this weeks episode of Around The OHL #kingstonfrontenacs #shanewright #2022NHLdraft #hockey #hockeyprospects #exceptional #ohl
Keean Washkurak’s dad not only played in the league, he was also an OHL official for 17 seasons. He shares some stories on Around the OHL @ohlsteelheads @stlouisblues #ohl #nhlprospects #mississaugasteelheads #stlouisblues #hockey
Bode is back!! @ny_islanders reassign Bode Wilde to the @saginawspirit #nhlprospects #newyorkislandershockey #ohl #hockey #juniorhockey #nhl
My Tweets