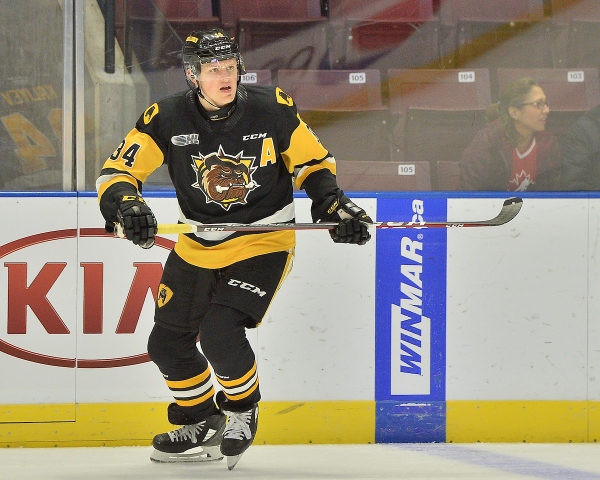 Arthur Kaliyev – The OHL has had a 60 goal scorer two of the past three seasons, and Hamilton Bulldogs forward Arthur Kaliyev is making a real case to join the club. He has ten goals in his last ten games, scoring in nine of those contests, to give him 25 tallies through 24 games.

Jan Jenik – The other half of Hamilton’s one-two punch has points in all 21 games this season, and has eight goals and 17 points in his last five games. Jenik and Kaliyev have scored a combined 44 goals this season, the rest of the team has scored 49. 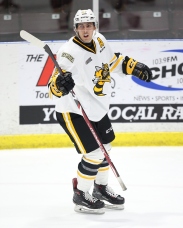 Sean Josling – My early season candidate for overager of the year. Undrafted in the OHL, and would have been a top pick in the U-18 draft had it existed when he came into the league, Josling has broken out offensively in his fourth season, with an even 21 goals and 21 assists in 21 games.

Too early to talk about a 1-16 playoff format? – It’s been a popular discussion in year’s past, and I expect it to crop up again this season. Should the OHL move to a playoff format that would see teams ranking league-wide, rather than by conference. Right now, the top team in the Western Conference wouldn’t even have home ice if they were in the east, and if the format were to change, four teams in the west would be outside the playoff picture. The disparity in points in the east is largely part to the separation of North Bay and Kingston, who are a significant step below the rest of the league and conference. 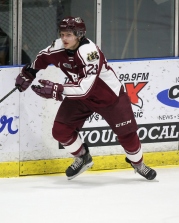 Much needed points for Kingston and NB – Speaking of the Battalion and Frontenacs, boy did they pick up some much needed points last weekend. North Bay beat Barrie to end an 11 game losing streak, while North Bay got by Owen Sound to halt their losing skid at a dozen games.

Mason McTavish – The fifth overall pick in the 2019 draft leads all rookies in goals, and is tied for most points. He has 12 goals in first 17 games, That includes four two-goal games. The OHL has seen a 16-year-old score 30 or more goals the last two seasons, could McTavish be next?

Cole Resnick joins Generals coaching staff – The Oshawa Generals have added the overage forward to the team’s coaching staff. Never drafted into the OHL, Resnick played 96 games in just over two seasons with the club. The story isn’t exactly uncommon, an eye injury forced Paul Maurice behind the bench before his junior playing days were suppose to be up. Luke Mercer did something similar with the Niagara IceDogs, as did Jacob Harris with the Guelph Storm.

Interesting. Can't say I've seen a scenario like this before, but I do know that Resnick is very well liked by his teammates in Oshawa. https://t.co/zUvaIUnfOo

Keefe gets the tap in Toronto – In case you’ve been living under a rock, the Toronto Maple Leafs fired Mike Babcock and are turning to Sheldon Keefe as the team’s next head coach. No stranger to junior hockey circles, Keefe coached Sault Ste. Marie for three seasons before joining the AHL’s Toronto Marlies. He also captained the Barrie Colts to an OHL championship in 2000.

Former OHLers celebrate 1000 game milestone – Corey Perry and Jeff Carter, both part of what was a very strong 2001 OHL draft, joining Brent Burns and Ryan Suter as other members of the draft class in the one thousand game club.

Doing It for Dale – The Barrie Colts are playing with a heavy heart this season, after Dale Hawerchuk announced he was taking a leave of absence earlier in the season to undergo treatment for stomach cancer.

This November we are raising money for stomach cancer research in support of our long-time Head Coach Dale Hawerchuk. The Barrie Colts will match every dollar donated to this cause. If you would like to donate, click the link below!#DoItForDalehttps://t.co/fLL2rK1NpE pic.twitter.com/PEgVInBVdB

Sudbury and Hamilton’s 21 goal game. Avery Hayes opened the scoring 6:40 into the first, that’s the longest fans had to wait for a goal all night. Sudbury scored a pair of quick ones in the first, 42 seconds apart, only to be outmatched by two Hamilton goals in the second period just ten seconds apart. Hamilton’s 8 goal 2nd is most by any OHL team since Erie opened the season with 8 in the third last year. Worth mention, Sudbury scored their 10th goal of the game to tie things up with just 13 seconds left.

Storm – I did not see this coming, though I didn’t think the Storm would be as bad as many expected, I in no way expected them to be at the top, or anywhere near the top, of the Western Conference. They are winners of nine straight, and were even an honourable mention in the latest CHL Top Ten Rankings.

Rusty honoured – There are many unsung heros around the rink, and one of them was honoured for his lengthy work with the Guelph Storm. Rusty Hammond has been with the Storm for 35 seasons, and more than 2,000 games, through the many ups and downs of junior hockey. Those ups included three OHL Championships. several OHL Championships. Rusty joined the Around The OHL podcast last year to talk about his time in the league, and what goes on behind the scenes. All the best in your retirement Rusty!

From minor hockey teammates to The OHL Mason Millman and Ryan Suzuki join Around The OHL to talk about being reunited with the Saginaw Spirit LINK in our BIO #saginawspirit #minorhockey #aroundtheohl #hockey #podcast #ohl
Checklist for the @barriecoltshockeyohl....1st OHL goal for Brandt Clarke ✅ 1st OHL shutout for Arturs Silvos ✅ 1st OHL win for coach Todd Miller ✅ Big Night in Barrie!! #barriecolts #nhlprospects #ohl #ohlphotos #hockey
Dalton Duhart is enjoying his time in Saginaw #ohl #ohlphotos #nhl #hockey #saginawspirit 📸 @sfrankimagery91
On the podcast this week, after being reunited with @saginawspirit Mason Millman and Ryan Suzuki share some of their minor hockey memories #carolinahurricanes #philadelphiaflyers #NHLprospects
My Tweets